One of the most iconic (maybe infamous is more apt a description), Billy the Kid is synonymous with the American west. His bloody, bullet-shattered life has been a frequent source for films, not too many of them actually any good. The odd exception? A 1988 western starring several up-and-coming stars and several established genre stars, it’s Young Guns.

A young gunfighter with a growing reputation, William H. Bonney (Emilio Estevez) is drifting along and on the run when he’s taken in by an English rancher, John Tunstall (Terence Stamp) in New Mexico. Tunstall has taken in a handful of young drifters who work his ranch and protect his cattle, but he finds himself facing the Santa Fe Ring, a group of cattle ranchers and businessmen trying to control the territory, including their leader, a cattleman named L.G. Murphy (Jack Palance). Things finally come to a head when Murphy-backed gunfighters callously gun down Tunstall. Bonney, also known as Billy the Kid, and Tunstall’s other men, the Regulators, are deputized to bring the men to justice. The Santa Fe Ring will not go quietly though, forcing Billy to take drastic action.

From The Left-Handed Gun to Chisum, Pat Garrett and Billy the Kid to The Outlaw, Billy the Kid has been the leading character in one western after another. The craziest thing? The 1980s western aimed at a younger audience…is one of the best! It’s probably right behind the 1970 John Wayne western Chisum. The history actually sticks pretty close to the facts of the Lincoln County War with only a few departures here and there. The look of the film feels spot-on (from the wardrobe to the New Mexico shooting locations), and the story doesn’t pull any punches, sticking to the dark, bloody source material.

Playing one of the American’s west most notable figures, Estevez is a scene-stealer as Billy the Kid. Past portrayals of Billy range from raging psychopath to petulant teenager, but Estevez finds a niche somewhere in between. His Billy is lightning quick with a gun, intelligent and always thinking…but he’s a little crazy, a little unhinged with an ever-growing ego. Estevez’s crazy, cackling laugh when Billy’s truly enjoying himself (usually after shooting someone) is downright creepy. But like so many western characters (anti-heroes or otherwise), Billy has a code he lives by, sticking with his fellow Regulators (his ‘Pals’) through — mostly — thick and thin. A solid, scene-stealing lead role.

The other Young Guns, the Regulators include Doc Scurlock (Kiefer Sutherland), Chavez y Chavez (Lou Diamond Phillips), Dick Brewer (Charlie Sheen), Dirty Steve (Dermot Mulroney) and Charlie Bowdre (Casey Siemaszko). We get little snippets of background as the story develops, but not much (Scurlock’s relationship with a young Chinese woman flops), so it would have been nice to learn a little more about the characters, all of them actual historical characters. With a touch of a younger, hipper Magnificent Seven though, the chemistry among Billy and the Regulators carries the movie as the Lincoln County War develops and grows bloodier and bloodier.

Hamming it up like only he can, Palance looks to be enjoying himself as the villainous Murphy. He’s not a developed, deep character. He’s just a sneering, intimidating villain so there’s that! Terry O’Quinn is excellent as Alex McSween, a lawyer who sides with the Regulators against the Santa Fe Ring. Western fans should also get a kick out of small parts for Brian Keith as a weathered bounty hunter and Patrick Wayne as Pat Garrett.

Clocking in at 106 minutes, ‘Guns’ follows an episodic story, bouncing along from one real-life incident to another. It makes for a somewhat slow, sometimes disjointed feel, but a quick gunfight always helps to get the blood and adrenaline flowing! Billy usually instigates the gunplay, all building to an impressive final shootout as the Regulators show down with the Santa Fe Ring and some Gatling Gun-toting cavalry. It’s a fun western with a cool cast and some always interesting history. It also produced an equally worthwhile sequel two years later. A surprisingly positive western that is definitely worth a watch. 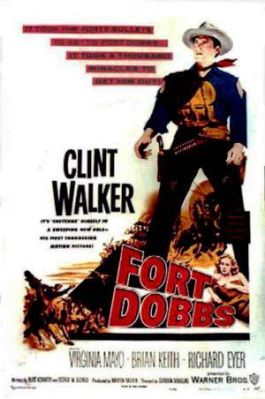 Starring in TV’s Cheyenne for seven seasons, Clint Walker shot to stardom as the burly hero of the long-running western. He never transitioned into a huge star in movies, but with a few exceptions (his supporting part in The Dirty Dozen among others) he was always quite at home in the western. Natural jump, right, TV to film? An underrated, exciting, well-made western, 1958’s Fort Dobbs, was one he made during his Cheyenne run.

Having killed a man in the small town of Largo, Gar Davis (Walker) heads off into the desert ahead of a posse. Comanches are on the warpath and killing anyone in their path though, Gar stumbling across a dead man with an arrow in his back. He switches jackets with the corpse and manages to trick the posse into thinking the Comanches killed him. Gar is still on his own though amidst raiding Comanches until he walks onto a small ranch run by a wife, Celia Gray (Virginia Mayo), and her son, Chad (Richard Eyer), who are waiting for her husband to return. He agrees to help the Grays get to the relative safety of nearby Fort Dobbs, but Mrs. Gray begins to think that Gar has a secret, maybe even about her possibly missing husband.

This is an example of what a western can and should be. The story doesn’t have to be on the level of The Searchers, Shane or High Noon where it delivers a message. It doesn’t have to be mindlessly stupid either full of action and gunplay. From director Gordon Douglas, ‘Dobbs’ isn’t a great, classic western. It is just a really good western, and that’s fine with me. It is shot on a relatively small budget with Max Steiner‘s score sampling his score from They Died With Their Boots On and even borrows some action footage from 1953’s The Charge at Feather River. But even on a small scale, it knows what it wants to do and how to get there. Unspectacular, solid entertainment that any western fan should be able to appreciate.

In the vein of the traditional, white-hat wearing hero from the 1940s westerns, Clint Walker is a great lead as Gar Davis. For starters, he looks like a western hero. Walker stood an imposing 6-foot-6 and weighed 235 pounds so he towers over basically everyone around him. When he starts talking, that deep, baritone voice sounds like it’s going to bounce off of people and echo back. His backstory is explained late in the movie, giving Gar a slightly darker side albeit a righteous darker side. Don’t go in thinking he’s the flawless hero, but he is a good hero who will ultimately make the right choice. It’s too bad Walker didn’t become more of a star in films because as is the case here and yesterday’s Gold of the Seven Saints, he’s perfect for the western genre.

He is capably helped in three main supporting parts, all three of which could have gone obviously very wrong. We’ve got the damsel in distress, her possibly shrill, annoying son, and a smooth, conniving gunrunner. Credit to Mayo, Eyer and Brian Keith for making the most out of their parts. I’ve long been a fan of Virginia Mayo, an actress who was always able to hold her own against some of Hollywood’s best tough guys. She’s tough, smart and gorgeous, able to stand toe to toe with Walker. Eyer as her son, Chad, is also very good. So often in the 1950s (maybe more than any other decade), child actors could single-handedly ruin the movies they’re in. In other films like Friendly Persuasion, The Desperate Hours, and The Seventh Voyage of Sinbad, Eyer shows he can act, genuinely act. He has a great scene with Walker too late in the movie, a natural, emotional scene for a 13-year old actor.

As for Mr. Keith, he’s a scene stealer as Clett, a gunrunner who keeps crossing paths with Gar and Celia as they make a run for Fort Dobbs. He obviously has had some past run-ins with Gar, and that tension comes out in these scenes, especially when Keith’s Clett goes after Mayo’s Mrs. Gray. I’m used to seeing him as more of a straight-laced good guy (like in Nevada Smith) so it’s great seeing him as a bad guy. It’s more of a smooth, quick-talking bad guy, but you get the idea. The final confrontation between Gar and Clett is appropriately epic featuring some great dialogue that feels right at home in the western. It’s not a huge part, but one that Keith knocks out of the park nonetheless.

The fairly straightforward story does just enough to keep you interested and/or guessing until the end. The Utah locations serve as a gorgeous backdrop to the trip to Fort Dobbs which upon arrival delivers quite a twist. The last 25-30 minutes are the more traditional cowboys and settlers vs. Indians story, but it’s handled perfectly. The action is exciting, even surprisingly graphic, and in the end everything wraps up nicely. Russ Conway has a good part as the Largo Sheriff in this final portion. Good, underrated western. Definitely worth checking out.