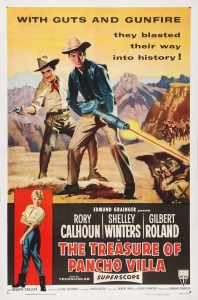 The western genre loves to revisit some historical eras and periods over and over. One of my favorites? The Mexican Revolution where it seems via the movies that countless American cowboys, bandits and gunfighters rode south to join the fighting. Released in 1954, Vera Cruz was ahead of its time in that portrayal of Americans involved in the fighting. Just a year later, 1955’s The Treasure of Pancho Villa tackled similar topics with a similar story. It’s not as good, but it’s still an enjoyable watch.

It’s 1915 in Mexico and the Revolution is raging. An American mercenary working for whoever pays him, Tom Bryan (Rory Calhoun) is sick of his chosen profession and looking for one last job that will allow him to retire. He finds that job — potentially — through an old friend, Juan Castro (Gilbert Roland), an officer in Pancho Villa‘s army. An immense shipment of gold is being shipped via train and Castro knows when and where. With a small company of revolutionaries, Castro and Bryan pull off a successful robbery but now comes the hard part. They’ve got to transport the gold via mule train to safety and with the Mexican army chasing after them. Can they? Can they avoid treachery among their ranks?

Following in the footsteps of the previous year’s Vera Cruz, ‘Treasure’ is a lot of fun. It had been years since I’d seen it, but once it popped up on Turner Classic Movie’s schedule, I had to set a recording on the old DVR. Too often 1950’s westerns are either too polished and clean or too much like a soap opera with big EMOTIONS and FEELS! ‘Treasure’ goes for more action, more betrayals, more cynicism, and overall, just a much darker story. Like Vera Cruz, it reflects more where the western genre will go than where it came from. These are stories that seem perfectly fitted to the spaghetti western and all the crazy violence and unhinged bandits and in-your-face violence. A fun, little B-western from director George Sherman.

Stepping in for Gary Cooper and Burt Lancaster, we get Rory Calhoun and Gilbert Roland. Neither actor was a huge star, but they’re perfectly cast as quasi-partners who don’t quite trust the other one. Their chemistry is easy-going and full of snappy dialogue, two tough guys who can always get the job done, however nasty. Calhoun played roles like this with ease, anti-heroes who were not always sure of their intentions. He also lugs around a Lewis gun — dubbed the Cucaracha — as his weapon of choice too, another spaghetti western precursor. Roland gets to ham it up some as Castro in bandito-mode, bandoleers across his chest, well-kept mustache, leather chaps, stylish hat and always smooth, always suave mentality. Nothing rattles this guy.

There’s not much of a cast here with Calhoun and Roland dominating the screen (that’s a good thing). The biggest weakness here is Shelley Winters as the daughter of an American miner forced to travel with Castro’s gold train. A schoolteacher, she talks a ton with Calhoun’s Bryan about principles, ideologies and motivations for fighting in the Revolution in scenes that lack any real punch and slow things down in a big way. Joseph Calleia is very solid as Pablo Morales, the mule driver who’s got some greedy plans for the gold if he gets a chance. Jorge Martinez de Hoyos has a small uncredited part as a representative of Pancho Villa working with Bryan.

I don’t know if my memory played tricks on me or what, but I remembered liking the movie a lot more than I did this time. A tad slow in portions in a 93-minute movie that should pop a little more. The action when it’s there is pretty solid, especially the train robbery and the finale with a sandbag fort of gold coins helping to hold off an advancing company of cavalry. Most of the movie is an extended chase, but it doesn’t always have a ton of energy.

Still a fun western but not quite as fun as I last remembered. Plenty to recommend though. Some great location shooting in Mexico add a whole layer to the story, a great feeling of realism as we watch things develop. We’re watching a story happen on the land it probably did happen so that’s pretty cool! Give it a shot. Not a classic but very entertaining.